Tollegno 1900 according to Niccolò Biddau

27/02/2021
T Talk
The internationally renowned photographer interprets the company through a series of shots that express its essence. Not only industrial archeology but also pure innovation. 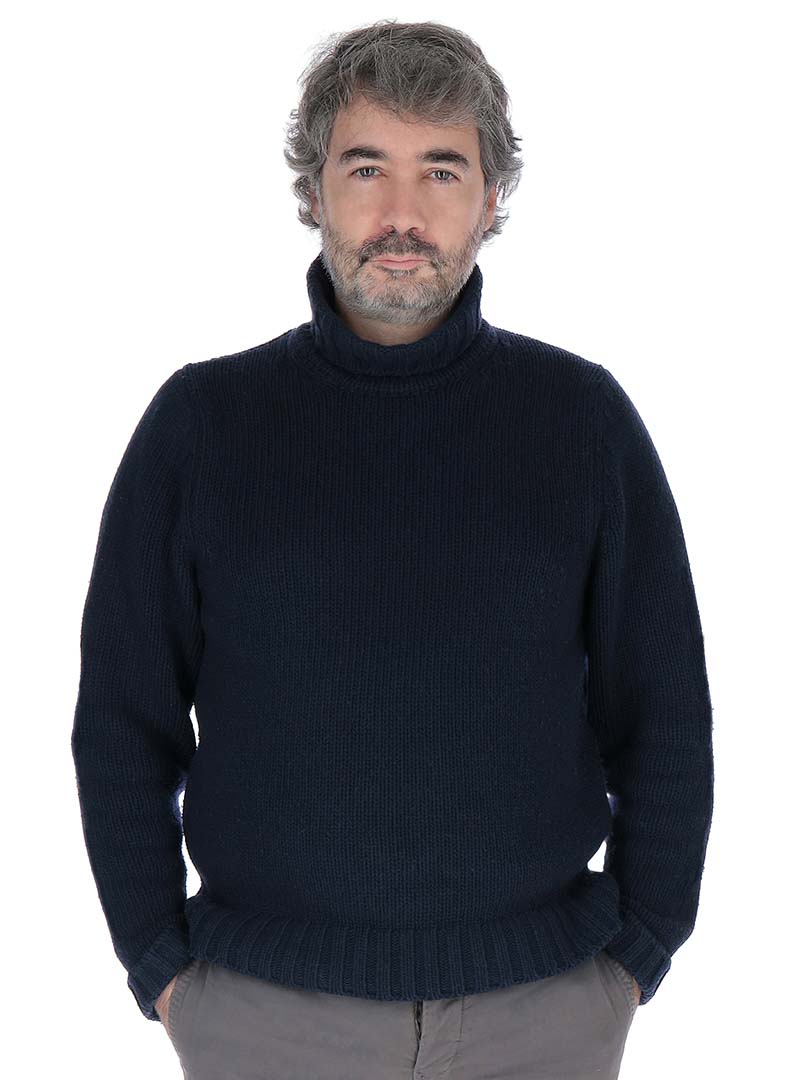 Introduction: Niccolò Biddau is recognized as one of the best industrial and architecture photographers. His pictures are part of museum and private collections, have been published in magazines, exhibited in museums, fairs and galleries in Italy and around the world.

è riconosciuto come uno dei migliori fotografi industriali e di architettura. More than twenty books have been published on his works. That he came in contact with Tollegno 1900 was written in the stars, being the company a rare example of industrial architecture and Niccolo’ being the “portraitist” of the most representative industrial realities of Made in Italy. Over 500 companies from the most disparate sectors (from steel to automotive, from pharmaceuticals to fashion through design and food) have chosen it to be told in images. Story telling is also this and Biddau, with 30 years of experience on his shoulders, knows it well. Considering that his life could have had a completely different course thinking about his education. The degree in Political Science did little compared to the passion for photography inherited from his father.

My first freelance jobs were some reportage in the Far East and in South America, but I immediately realized that my eye was sensible to something else and I dedicated myself to nude and fashion in Italy and abroad. Since 1998, privileging black and white, I have expanded my range by focusing on urban landscapes, sculptures and interior photography.

The love at first sight and the turning point came a few years later by investigating the production cycles of Italian companies.

It was 2002 when “the aesthetics of technology” became the center of my interpretative language expressed through photographic campaigns on the industrial excellence of Made in Italy which, in addition to being published in monographs, have also been exhibited in shows and internationally awarded. At the same time, however, I also went through other ways, not too far from the my initial love, becoming a curator  of books and exhibitions focused on the theme of Italian industrial photography on behalf of institutions and companies. Hence the development of a new research centered on architectural and monumental complexes with their artistic components.

It seems like a natural conclusion that he was judged in 2010 by the jury of the Black and White Spider Awards, made up of 39 of the most important decision makers in the world of photography, for originality, artistic merit and style, as one of the best international photographers in the use of black and white. It is not surprising that Lincoln Germanetti, CEO of Tollegno 1900, but above all an art lover, contacted you.

The collaboration started through Instragram. Dr. Germanetti was impressed by some of my pictures and contacted me for further information.

The first opportunity to work together was the 140 anniversary of Ragno for which a campaign was created  on the company’s architectures and environments. Our 4-hands work then continued with Tollegno 1900 on the occasion of another important anniversary: its 120 years! Both fascinating challenges: companies with strong roots and with important development projections.

If you should summerized Tollegno 1900 in a snapshot, which one would you choose? 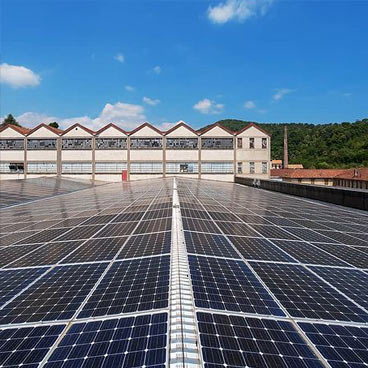 I would chose a shot I took on a beautiful day in Spring 2020, made very incisive by the light. It is a picture that is the perfect synthesis of what are the many value aspects of the company: sustainability, tradition and respect the environment.

Tollegno 1900 is an example of industrial archeology: which shots best enhance this soul and why?. 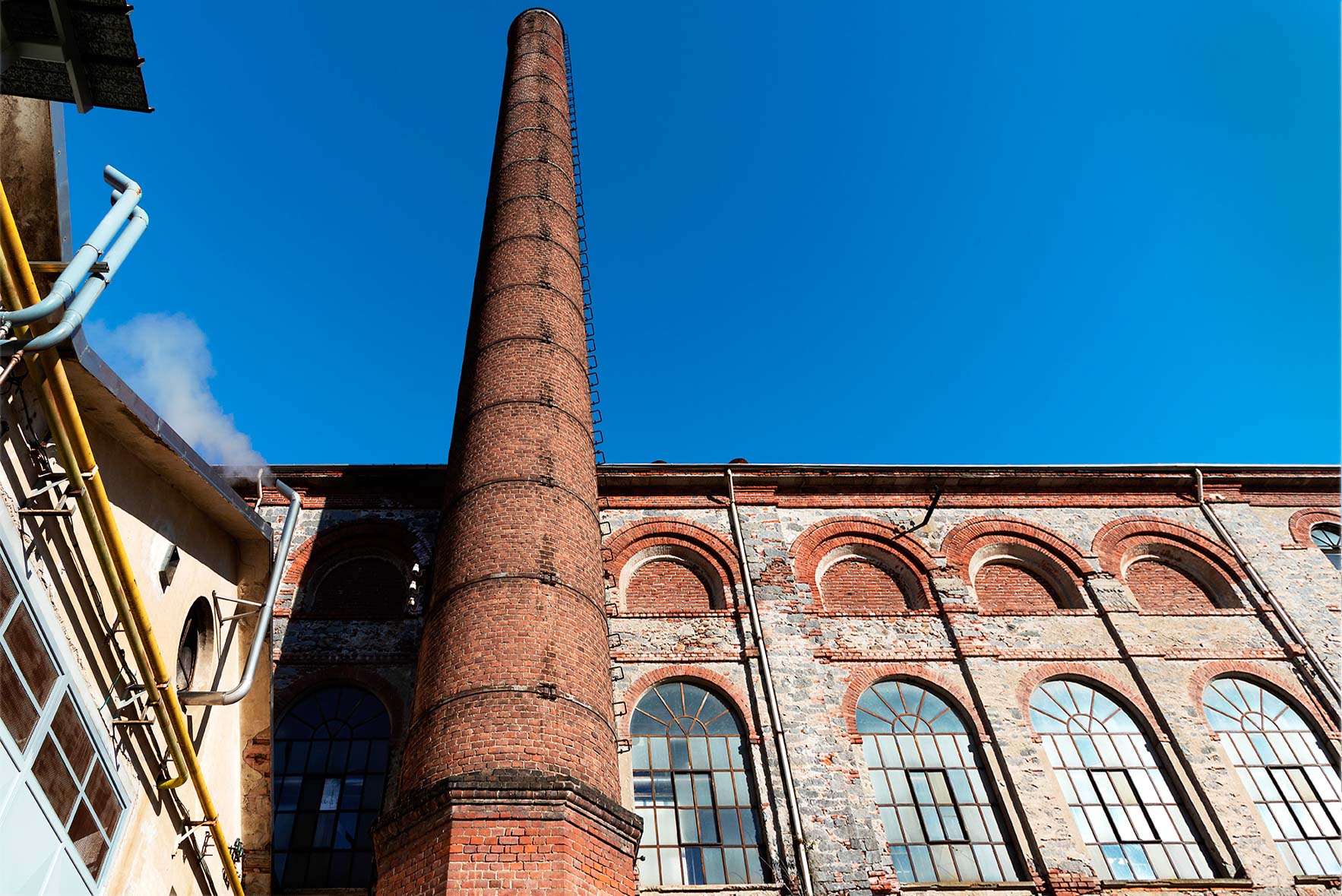 There are two among others, which are a valid expression of it because they represent the protection and conservation of an architectural heritage of extreme value. The first image shows the restored chimney, highlighting its impact. Few people know that these architectural works were born in England but draw the inspiration from the Gothic bell towers and from the Italian Renaissance. From the nineteenth century they dominated the industrial landscape also with constructive virtuosity, but if originally the chimneys were square in plan, only later did the section became circular to ensure more statics.

The second shot shows the “Sala Luce” : a former department for the processing of yarns and fabrics which today is used as a space for exhibitions and events. A magical environment where the architecture interacts perfectly with the light that penetrates through the windows at different times of the day, each time giving a very suggestive atmosphere.

Are these pictures also a story teller of the company’s philosophy?

No doubt. Many companies preferred to demolish buildings that they considered outdated, but Tollegno 1900 did not. This means not only having the “business culture” well rooted in one’s DNA, but also having respect for one’s history for that of the territory and of the industry. The process of restoration and functional reconversion certainly require huge investment but have value aspects of great importance.

Any difficulties in making the report?

Honestly no, because the campaign was created to perfection, in its design phase as well as in its realization. When there is a constructive confrontation and the company’s communication objectives are defined at the origin everything is simple. I had the opportunity to access all the locations that I thought interesting to evaluate, even the panoramic ones. We have always acted in compliance with all the safety regulations and evaluated the feasibility of shooting.   As for the light, I made the exteriors of the factories, in spring with a beautiful light to best enhance the industrial architecture.

And his last project – Changing Milano – published at the end of 2018 is based on architectural photography.

The concept of the campaign starts from the idea of showing the uniqueness of the architectural net of Milan in a vision that knows how to bring back the origin of the form in order to achieve the “minimum”. That perfection and coherence that an object reaches, in architecture as well as in photography, when it is no longer possible to improve it by subtraction. It is the quality of that object that is in focus, in which every element, every material and every detail enhanced are essential, become necessary and universal through the transmission of the photographic medium.

What is the objective value of your creativity?

Probably the ability to redraw the contours of the reality of things by pouring all the subjective sensitivity that a vision is able to suggest me. By adopting black and white as an interpretative language, I am led to work on the void and the full, enhancing the absolute of matter through the stillness that is imprisoned within it. My photography focuses on the innate stillness of industrial objects, sculptural and architectural forms and this is communicated through the details which, almost always hidden, once identified, spring up as vital materials.

As Christian Caujolle said in the introduction text of the monograph and of the exhibition held at the Milan Triennale “INDUSTRIA”: “Niccolò Biddau fits into a tradition characterized by an irreproachable formal requirement, by the framing and the relationship with the forms, by the image that affirms its originality, by light and form in its perfection. A need that is at the service of a lover for the material and the volumes of objects and, at the same time, the research for the structure (fundamental and often not very visible) and who produces those objects.The subtlety and rigorous approach are naturally in dialogue with excellence, with a particular focus on beauty, but also for those lesser-known sectors of industry. The choice of black and white, the claim of an image conceived and built without gratuitous romanticism or decorative winks, highlights what is at the very basis of reality and which is always unreachable. There is an obstinate will to order things in order to try to understand them better and to give them meaning sublimating their appearance. In this work there is simply the will to demand the best”. 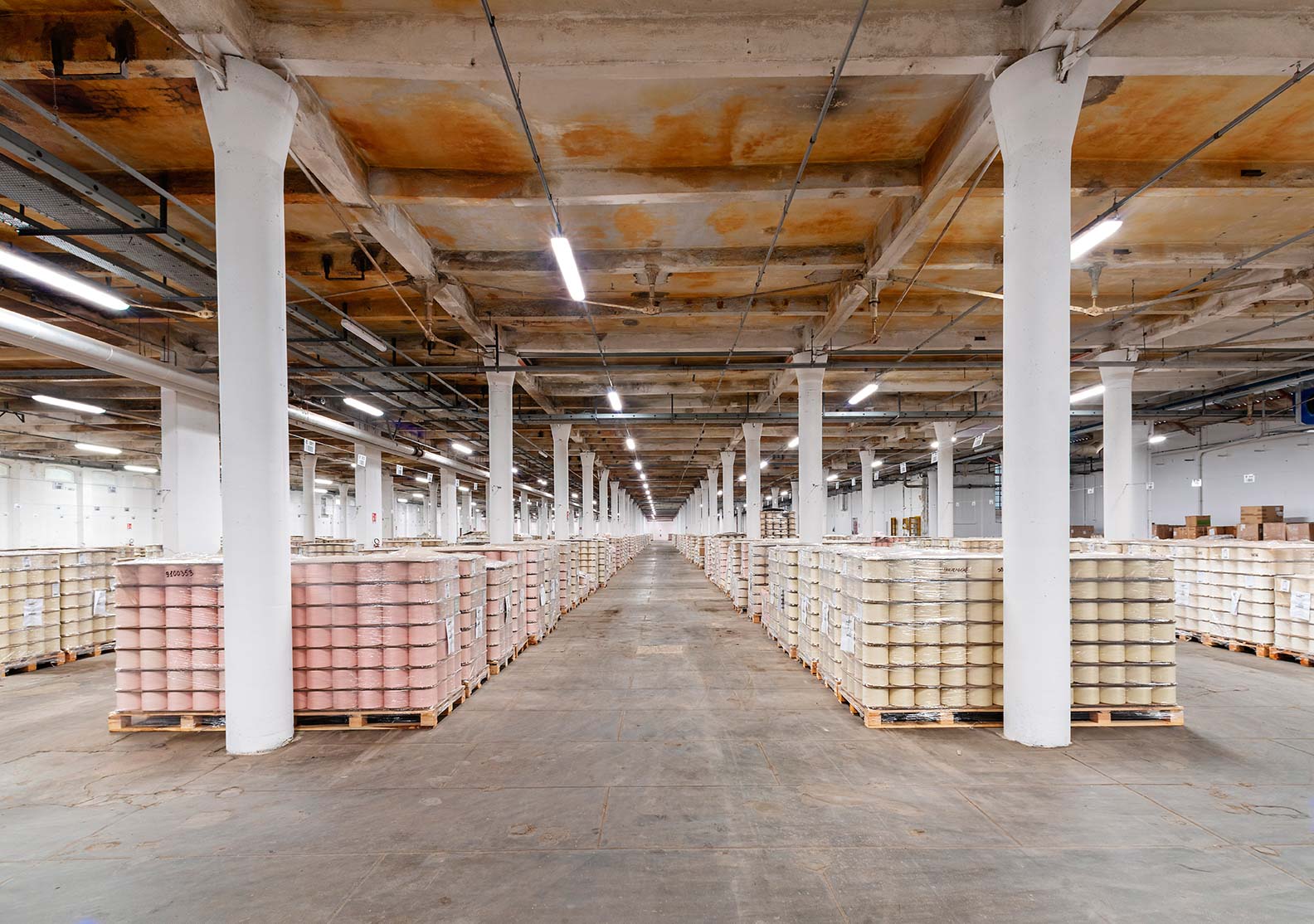